Approximately 20% of the U.S. population can be served within a four-hour travel radius, or the standard 300-mile “just-in-time-delivery” radius.

Fulton County is located between important upstate metropolitan areas in the Capital Region and Utica­‐Rome. Numerous highway connections including the New York State Thruway and Adirondack Northway put major urban markets within four hours of Fulton County. The Albany International Airport and Port of Albany are under an hour away. Approximately 65 million people can be served within a four­‐hour travel time, or the standard 300­‐mile “just­‐in­‐time­‐delivery” radius.

Approximately 20% of the U.S. population can be served within a four­‐hour travel radius, or the standard 300‐mile “just‐in­‐time-delivery” radius.

The County’s world­‐class recreational assets are within a four­‐hour drive of millions of people, including the urban markets of New York City, Montreal, Boston, and Philadelphia.

Fulton County is located within New York’s “Technology Triangle” formed by GlobalFoundries to the east, SUNY Poly College of Nanoscale Science and Engineering to the south and Marcy Nanocenter at SUNY Polytechnic Institute to the west.

GlobalFoundries, an international semiconductor foundry that manufactures integrated circuits for semiconductor companies, has invested over $14 billion into its Fab 8 facility in Malta, NY, and employs over 3,000 workers. The Nano Utica Initiative at SUNY POLY is a $1.5 billion economic development initiative to create the world's largest shovel-­‐ready semiconductor site. 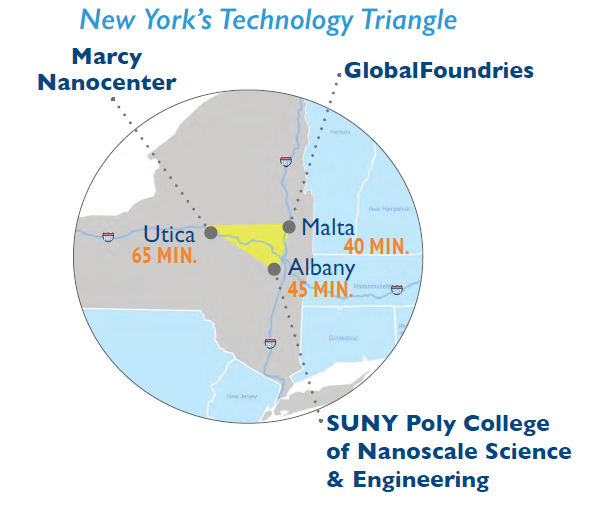