The Colonial legislature stated on April 1, 1775 that "the money raised to complete the Court House and Gaol at John's Town in the County of Tryon has been found insufficient," and directed the levying of yet an additional 900 pounds toward the completion of the structure as well as naming Sir John Johnson as trustee to replace his recently deceased father.

Sir John Johnson made his last appearance at the courthouse in the town named for him on March 12, 1776 when he served as one of the three presiding judges. By that time, of course, the Mohawk Valley was already boiling with revolutionary sentiment which led Sir John to decamp - along with 170 tenants and friends - for St.Regis in Canada on May 1, 1776. 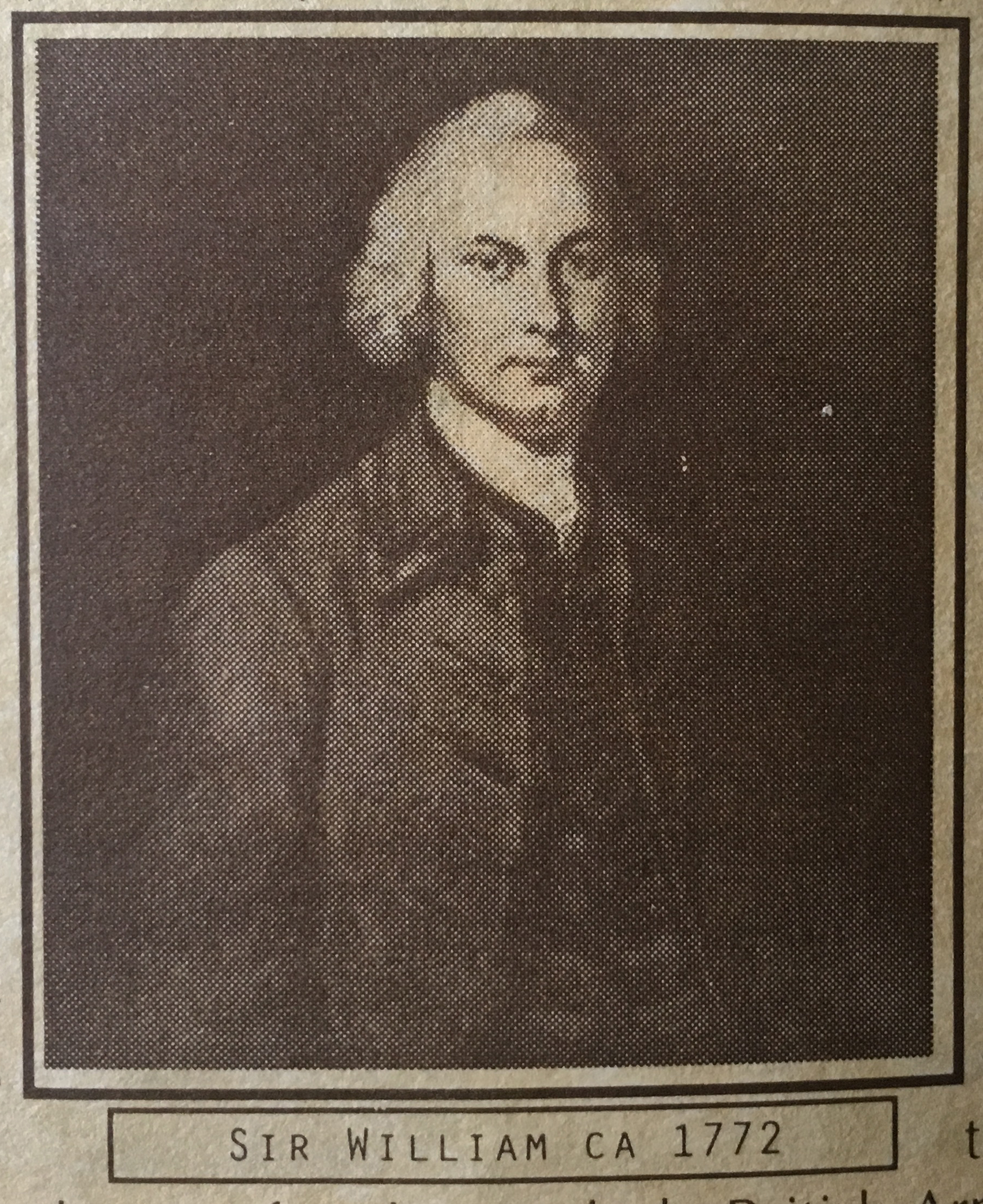 The session held on October 9, 1781 in the Courthouse was one fraught with danger for the participants, but, happily, they were then unaware of the approaching onslaught. A powerful loyalist raiding party was on its way down the Mohawk Valley headed for Johnstown, commanded by Major Ross, second in command by Captain Walter Butler. Captain Butler had appeared as a lawyer in the old courthouse prior to the conflict and his father,John Butler, had served as one of the three judges at the first session held in the courthouse and had formed and commanded as its colonel, the Loyalist unit known as Butler's Rangers. Many of the persons in the Court that October day would be under fire at the Battle of Johnstown just 17 days later.

On April 2, 1784, the county lost its Loyalist designation of "Tryon" and was officially renamed Montgomery County after a Revolutionary War hero, General Richard Montgomery, who was killed during the storming of Quebec, in 1775. And, of course, the courthouse became the Montgomery County Courthouse.

On October 26, 1807, town meetings in the courthouse were prohibited, and, on October 30, 1810, the supervisors forbade the future holding of school in the building. Obviously, the courthouse did a lot more than serve justice in the early years of the county.

In November of 1836, the Sheriff of the county was directed to refuse further use of the property for any meeting to discuss or lecture on slavery "believing that such discussions are calculated to disturb the public peace."

On October 6, 1826, the Sheriff was directed to purchase and install a bell in the courthouse (price: $30). The bell was not replaced. The original bell placed there in 1772 is still housed in the belfry of this old structure. It consists of a piece of wrought iron bent into the shape of a triangle, suspended in the belfry. A hammer on a hinge strikes the triangle when a rope is pulled; the bell gives off a dull clang. This old bell was rung at the surrender of Cornwallis at Yorktown, during the news of the signing of the Declaration of Independence and our U.S. Constitution, the same as the Liberty Bell in Philadelphia and in recent years when all the bell is across the nation were rung in the 200th celebration of the U.S. Constitution.

The opening of the Erie Canal in 1825 and the Utica and Schenectady Railroad in 1836 redirected traffic from the old state road through Johnstown, leaving the county seat v, el I off the beaten path; an influential group of citizens in the southern part of Montgomery County ~ succeeded in getting the county seat moved to Fonda in May of 1836. On March 14, 1837, "the building situated in the Village of Johnstown, heretofore known as the Court House, Jail, and Clerk Office of the county of Montgomery" were sold at public auction to the highest bidder. The buildings sold for the magnificent sum of $2,040 as recorded on December 6, 1837. 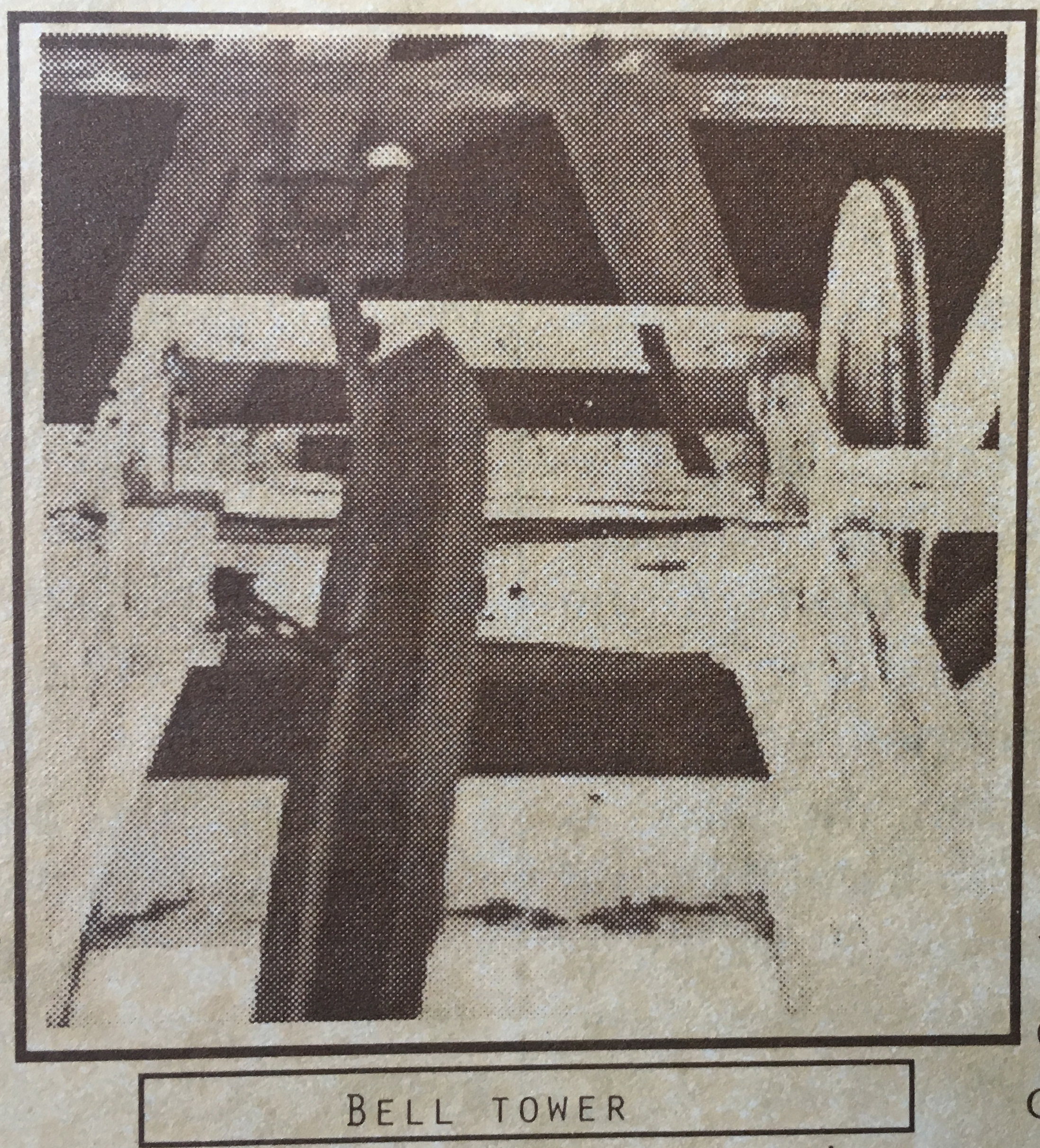 Southwick retained Aaron Burr as well as three other lawyers to defend him. By that time, Burr was one of the best known men in America, having served as an officer in the Army during the Revolutionary War, as a senator and as senator ans as the Vice-President of the country. Additionally, he had killed Alexander Hamilton in a duel in 1804 and been tried (and acquitted) of the charge of treason in 1807.

The first recorded mention of a separate building to house the County Clerk occurred in a resolution of the Board of Supervisors adopted on October 22, 1813, appointing a committee to apply to the legislature for authority to erect a fireproof county clerk's building at the Southeast corner of the courthouse at a price not to exceed $600. (Building costs. you may note, have risen somewhat since those days.) In the Fall of 1814, the Supervisors authorized the purchase of furniture and a stove for this new structure. And, in 1817 the Board authorized the purchase of a "dye and impression to stamp the seal of the county and court upon the process and proceedings thereof."